Register with this link to the Zoom site:
Click here to register

Our Topic: “The Disappearing Frame: A Story of Stained Glass and Architecture”

In his essay, “The Symbolic Bible of the Middle Ages,” architect Francis Palmer Smith calls stained glass the “handmaid of architecture” and “not a mere archaic survival.” Smith, like many of his American contemporaries, was a practitioner of the Gothic Revival, a style that prevailed in many parts of the United States from the 1850s to the 1950s. During this same period, stained glass in the Neo-Gothic and Munich Pictorial styles flourished. Moving into the 1950s, churches progressively adopted more modern styles. Stained glass designers found ways to bring the stained glass into conversation with new architectures, especially the shape of a window opening and its surrounding casework. We see an early example of this shift in Emil Hoffman’s window designs for Mary Queen of Peace in Webster, Groves, MO.

Today, many communities find themselves looking to salvage and reuse historic windows. In today’s conditions with no prevailing architectural style, what can we say about the relationship between stained glass and architecture? Is stained glass still architecture’s handmaid or architectural afterthought? How do we design new buildings to accommodate old windows so that they are not mere archaic survival? 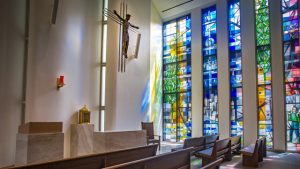