Served as architect for the renovation of the sanctuary of this downtown congregation’s landmark building commemorating its 100th anniversary. The chancel was enlarged to allow the future placement of a free-standing altar while the altar rail was moved to the bottom step of the chancel for easier access. The pulpit and lectern were brought inward to give a stronger visual focus to the broad sanctuary. Finally the ceramic and glass mosaic reredos and lunette were restored to their original beauty.

A new freestanding altar for renovated chancel of this historic church in downtown Pittsburgh, Pennsylvania. Created a design for the altar that respects the character of its historic setting through the thoughtful use of scale, proportion, materials and detailing while maintaining its own sense of identity.

The brass tracery of the altar echoes the proportions of the existing altar and reflects the gestures and movements of the presiding minister. This brass tracery constitutes the body of the altar and is detailed in a manner similar to the existing communion rail standards while rising from four marble plinths that recall the base of the existing altar. Five Greek crosses, patterned on the cross-fluery found in the ceramic and glass reredos, are carved into the oak mensa.

Tabernacle & Stations of the Cross

The design and installation of the tabernacle and Stations of the Cross was done working as liturgical design consultant in collaboration with New Guild Studios.

The tabernacle is an oak cabinet based upon a 13th century carved ivory tabernacle from France. Patinated copper relief panels depict the symbols of the four evangelists and a lily and thorns motif. The doors of the tabernacle open to form a triptych revealing an icon of the Pieta. This project received an Honorable Mention from the Ministry & Liturgy Visual Arts Awards.

The Stations of the Cross include the work of two liturgical arts studios. Granda Liturgical Arts, Inc. of Spain created the bronze relief’s of each of the fourteen stations. The wood framework, enameled roman numerals and descriptive captions as well as installation of the Stations of the Cross were executed by New Guild Art and Design Studio of Braddock, Pennsylvania.

Provided design of the patterned slate and a new tower cross. Shaped in the form of a Greek cross, the new tower cross measures 6 feet from end to end and stands 170 feet above Grant Street.

Oratory of the Lamb & Columbarium

The design of this columbarium was done working as liturgical design consultant in collaboration with New Guild Studios and art historian Christine Torie. The columbarium which can hold the remains of 200 individuals was designed to resemble a medieval reliquary. The cabinet is constructed of wood and covered with enameled & patinated copper repoussé panels and gold leaf. The door of the columbarium consists of 25 glass panels framed into a bronze door. Each glass panel is etched, colored and gold leafed to create an early Christian symbol related the gospel of death and rebirth. In Christ. The columbarium is located in the little used narthex under the churches’ tower. The narthex encaustic tile floor was restored, walls repainted and a new set of wood & etched glass paneled doors installed to complete the project. William E. Brocious AIA, LEED GA
Brasswork: Francis J. Nowalk
Woodwork: Wilson & McCracken
Columbarium Fabrication: New Guild Studio
Tabernacle fabrication: New Guild Studio Pittsburgh, PA 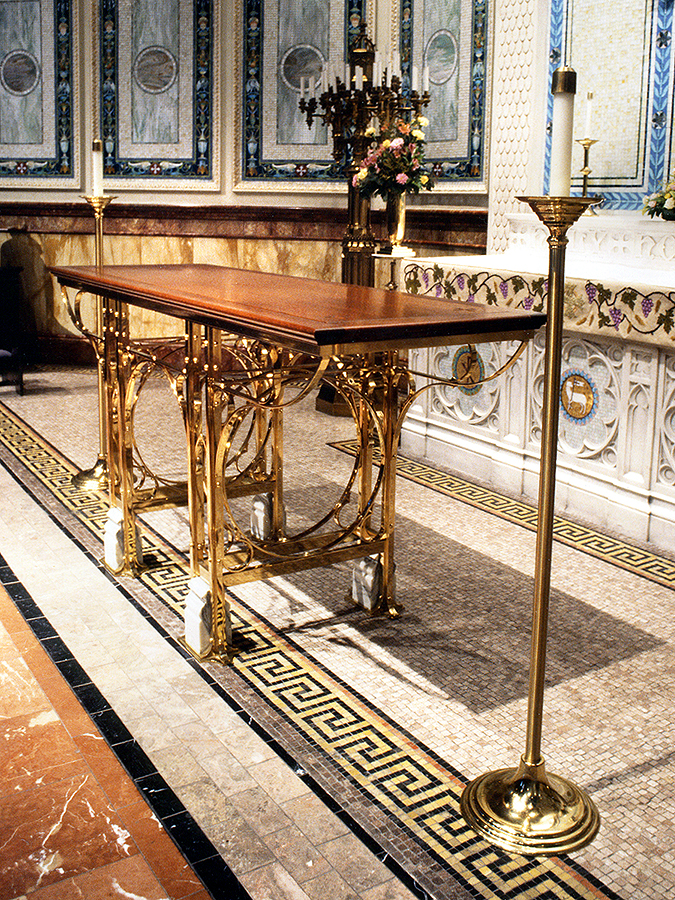 View of free-standing Altar in Sanctuary 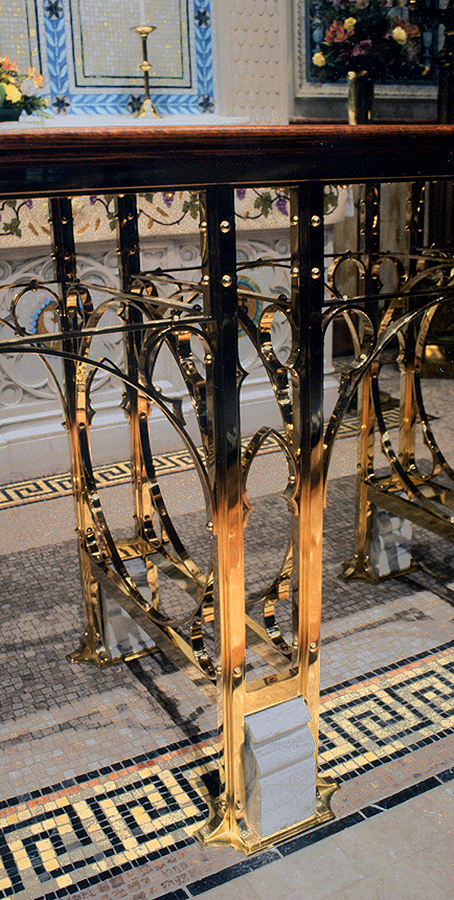 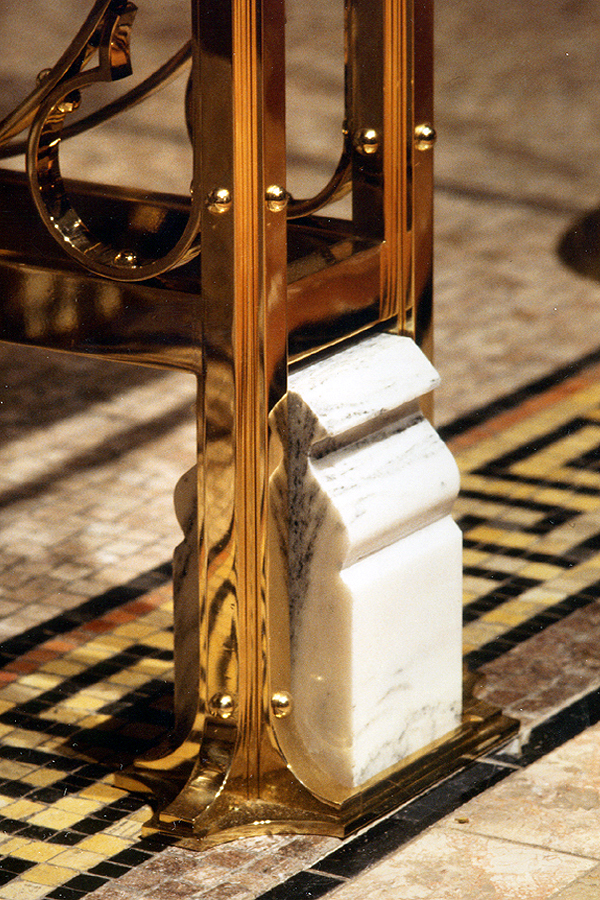